UPDATE (30/09/2019): Finally. Over a year after we posted this, the film has had a release date change to January of 2020, and now a revised first trailer has been rated tonight by Consumer Protection BC. We presume it will be landing sometime in the next couple of weeks – if not days in time to play with Joker this weekend. As always, stay tuned for more. 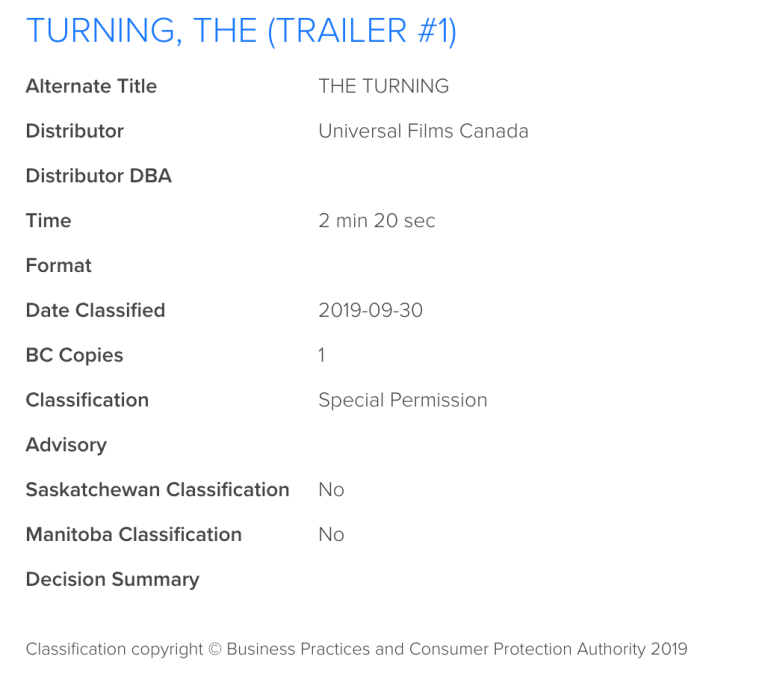 With The House With A Clock In Its Walls released in two weeks’ time, Universal and Amblin are gearing up to launch their next horror fantasy The Turning. Floria Sigismondi’s adaptation of Henry James’ The Turn of the Screw has had its first trailer rated last night by Alberta Film Ratings – given the more adult 14A Canadian rating for the piece, this is unlikely to go in front of Eli Roth’s latest but rather in front of The Predator or even as soon as this weekend with The Nun. In any case, stay tuned and we’ll have more information as soon as it arrives!

For more than 100 years, a deeply haunting tale has been passed down to terrify audiences. “The Turning” takes us to a mysterious estate in the Maine countryside, where newly appointed nanny Kate is charged with the care of two disturbed orphans, Flora and Miles. Quickly though, she discovers that both the children and the house are harboring dark secrets and things may not be as they appear.

Starring Mackenzie Davis, Finn Wolfhard and Brooklynn Prince, the film is released in the U.S. on January 17, 2020, with a UK date to be announced.

Founder/EIC of TrailerTrack and Marketing/Distribution student at the UK's National Film & Television School.