UPDATE: Now officlal – and from our understanding this includes the UK/Europe as well! Get an exclusive look at #TerminatorDarkFate, only in #IMAX theatres with Joker. Starting this Friday. pic.twitter.com/Ui6knaPLeA […]

UPDATE: Now officlal – and from our understanding this includes the UK/Europe as well!

Get an exclusive look at #TerminatorDarkFate, only in #IMAX theatres with Joker. Starting this Friday. pic.twitter.com/Ui6knaPLeA

On the heels of a brand new trailer just a month ago, an extended peek at director Tim Miller and producer James Cameron’s Terminator: Dark Fate is set to grace the big screen in the next few days. No doubt in time for the release of Joker next week, an extended 5-minute ‘IMAX trailer’ for the film has been rated today by the German FSK, as well as Canadian classification boards in the last week.

Based on the runtime, it’s likely to be the extended footage shown of at SDCC earlier this summer (read a description here), though chances also are of an extended behind-the-scenes look. In any case, if you want to get a new look at the return of Sarah Connor, you’ll likely need to ger your IMAX tickets for Todd Philips’ Oscar-tipped ‘cautionary tale’, as we don’t expect this piece to come online. We’ll be sure to update with any official announcements as they come in… 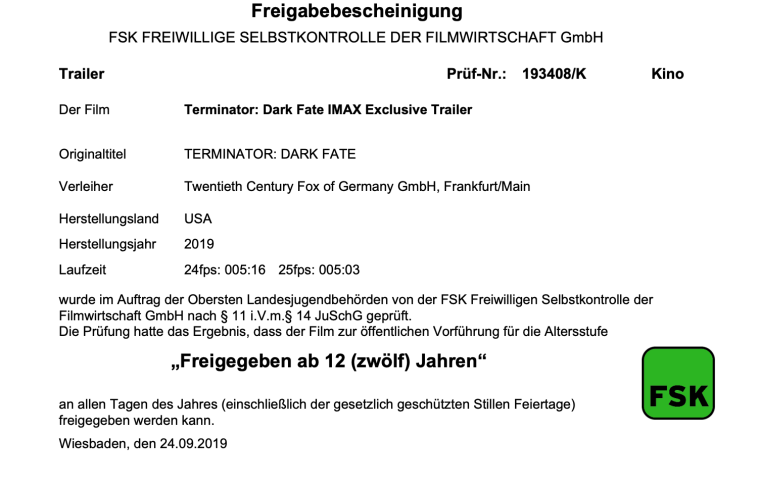 Starring Linda Hamilton, Mackenzie Davis, Natalia Reyes, Gabriel Luna, Diego Boneta, and Arnold Schwarzenegger, the film is released October 23 in the UK, followed by November 1 in the US.