Skip to content
POLL: Battle Of The Marvel Studios Teasers Round 1 – Vote For Your Favourite Marvel Cinematic Universe Debut Trailer Ahead Of ‘Avengers 4’ Launch
Features

POLL: Battle Of The Marvel Studios Teasers Round 1 – Vote For Your Favourite Marvel Cinematic Universe Debut Trailer Ahead Of ‘Avengers 4’ Launch

Back in June, when we got upwards of 20 brand new first looks at some of 2018’s most anticipated releases, we ran the extremely popular June Trailer Madness poll – […]

Back in June, when we got upwards of 20 brand new first looks at some of 2018’s most anticipated releases, we ran the extremely popular June Trailer Madness poll – which brought us some of our biggest visitor numbers ever.

This week, with anticipation for the long-awaited first look at the Russo Brothers’ untitled fourth Avengers film reaching fever pitch, we are taking this opportunity to look back at the films – and more specifically, trailers – which led to the much-hyped culmination of the Marvel Cinematic Universe as we know it.

We have seeded 23 first/teaser trailers for Marvel Studios’ 21 feature films into a five-round bracket, ranked by their global box office* to date. Going all the way back to 2007 with Iron Man, these trailers are the very first footage the general public got to see of those respective films. Take a look at the full bracket below: 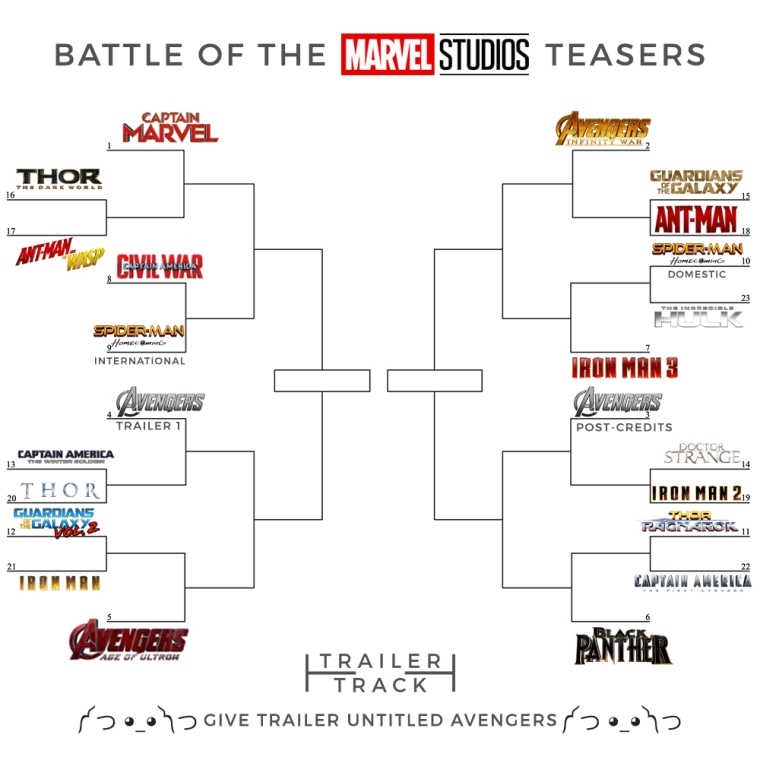 * N.B.: As Captain Marvel is not released until next year, the trailer has been ranked as seed #1 due to its recency. Spider-Man: Homecoming had differing domestic (U.S./Canada) and international first trailers released simultaneously – both are represented in the bracket, with the international at a higher seed due to its ranking based on overseas box office. Both The Avengers’ teaser trailers – the one featured as the post-credits scene on Captain America: The First Avenger and the first official teaser trailer from October 2011 – are also represented in such a way due to the former not having been formally released online. Despite being the first footage releases for that film, the Captain America: The First Avenger Super Bowl spot is not included, as it did not play theatrically as a trailer.

Revisit the 14 trailers facing off in today’s first round below and cast your votes! Don’t forget: this isn’t just voting for your favourite film, but your favourite trailer, so don’t automatically vote for a specific trailer just because you like the film more. The voting closes tomorrow at 9pm UK/1pm PT/4pm ET, with the second round starting shortly thereafter.

Group 1 – Thor: The Dark World vs. Ant-Man And The Wasp

Group 4 – Guardians of the Galaxy vs. Ant-Man

Like Loading...
Posted on Nov 20, 2018 0 By Anton Volkov Features Posted in Features Tagged #Battle of The Marvel Studios Teasers, Features